Jewel Pearson confirms that starting the construction on her modish tinyhome was simply amazing.

“It’s been a lifelong dream,” said the 48-year- old. “Even while my daughter was growing up, I knew I wanted to have a mobile lifestyle at some point. At that time, the thought was it’d be a RV. I’ve gone to RV shows and searched online, and I realized the ones that I liked were about three hundred to five hundred- thousand dollars. I knew that wasn’t going to be feasible for my long-term plan.”

After her daughter went off to North Carolina Central University, Pearson began to downsize from her lofty 4-bedroom and 3-bathroom home— over a 10 year stretch, she eventually moved into a 1 bedroom apartment to accommodate her new lifestyle. 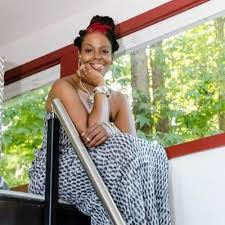 “I stumbled on Tiny Houses almost 2 years ago, and that’s when I decided I wanted to build a tiny house,”said Pearson. “So I began researching everything I could to understand all of the details related to tiny houses; the build, the materials, plumbing, electrical, DOT and zoning requirements – any and everything tiny house related.”

She and her sister worked on the design and drew the plans for her home. Pearson found a builder, before getting connected with the show. She saw an online application for HGTV’s Tiny House, Big Living show and then applied for it on a Sunday… HGTV called her the following Monday.

“Building this is long term for me. I’ve established a particular lifestyle for myself over the years and I still wanted to be able to maintain that. For me, it was building a tiny house, but still building something I loved. I knew if I skimped on things, it wasn’t going to be something that I’d be able to commit to long term–it had to be done as cost efficient as possible, but overall, it also had to make me feel good as well as happy–I bought my trailer in October 2015, and at that point I was 100% committed to this,”said Pearson.

With swanky decorum and elegance that she refers to as “ethnic chic,” Jewel Pearson was able to build a beautiful home equipped with all of the necessities, including a screened in porch and Juliette balcony off of her sleeping loft—she not only created a model house…Pearson made a home using vibrant and eclectic style.

How did you decorate?

I’ve had most of these pieces in my tiny home for years. They are my favorite pieces, which I have to have to call a space home. Like this guy right here, his name is Mandela and he’s always seated at my front door. I had to make sure he had a place in the tiny house. These are the things that I know I’m not giving up, and they have to be part of my home. I wanted to live tiny, but I didn’t want to give up things to the point of unhappiness. I incorporated a walk-in closet so I could keep all my clothes and shoes and purses… which makes my design resonate with a lot of women. I live tiny, but I’m not a minimalist. 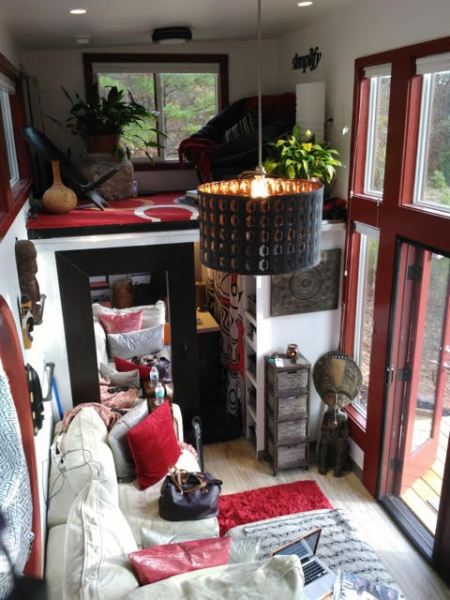 Why did you sell your first home?

I brought my house in Atlanta in 1996. I loved my house, but after my daughter went to college it was definitely more than I needed. And after 10 years there I was somewhat tired of being in the same neighborhood, driving the same streets, and the responsibility of home ownership. So, I sold it in 2006. I knew then that I wasn’t planning to buy another. I moved back here to Charlotte in 2006, then a few years later I decided to move to Fort Lauderdale, Florida. After that, I moved back to Atlanta. I moved back here to Charlotte in 2013. I joke and say I have Adult ADD because I get “bored” and need new scenery or I might move to avoid cold weather and owning a home wouldn’t afford me that flexibility. I’ve got a little Gypsy in me…

How was the first night in your tiny home?

Initially my tiny house was located in a RV Park and Marina off Lake Wylie. My first night in the tiny house also coincided with final filming with HGTV and the end of my apartment lease – and so it was somewhat stressful with all that I had going on.

The house was staged for filming so it looked finished, but it wasn’t completely done – but I needed to be in it. A couple of things had happened during the build that impacted the install of my shower fixtures so we were waiting on a part to come in, the toilet I’d originally ordered didn’t work with my setup and I didn’t have AC because I was financially tapped out coming off the expense of my build. So the first night and quite a few weeks after that were extremely challenging and miserably hot, fortunately the RV Park had nice facilities onsite so that helped. But even through all that I still loved my tiny house and I knew once I got it all together, it was going to be alright.

Have you had guests? Do they marvel at the finished product of your tiny home?

Yes, my brother and sister visited during the build, but haven’t seen the finished product in person. My mom and my 92-year-old aunt just visited and they loved it, my daughter visited during the build and was just here to see it finished and said she was very proud of me, which felt great, my local friends of course visit and I even offer tours. The comment that most people seem to make is that it’s a lot larger than they imagined and I always laugh because I believe that some people thought I was living in a tiny box. Yes, there are some tiny houses that are very small, I also know several people that live in smaller tiny homes – but mine is a little larger and has more space than what most people associate with a tiny house. 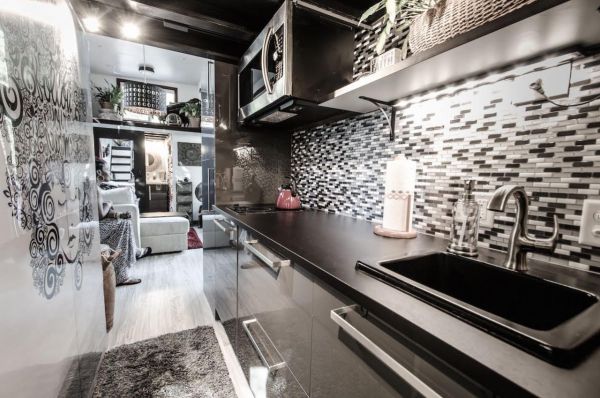 Are you still in the workforce?

How did it feel to build your dream house on the show?

From 7th to the 9th grade, I was on a kids show here in Charlotte so, I’m kind of familiar with TV. It wasn’t a foreign concept, but it felt awkward filming and setting up some of the scenes. I was really hoping throughout the filming that the show wouldn’t turn out as awkward as it felt while filming it and once the show aired it was perfect. It turned out great; our producer and film crews were excellent.

How does it feel to get that type of media attention?

A. It’s a combination of great and maybe sometimes a little uncomfortable. I’m generally a private person, but people all over now know my house and me from the show and from my online presence. It often catches me off guard for someone to approach me and say, “I know you, I’ve seen your episode. I love your tiny house.” But it’s also a great thing to bring awareness to tiny homes and a lot of people connected with my house due to the more contemporary and modern design. It was always my intent to segue my build into a business of sorts and of course the exposure from the show helped with that. I sell my plans, I offer tours of my house and consultations to help other people achieve their tiny house dreams. Obviously being on the show helped me get out there more than what I could have done on my own.

Do you plan to retire here?

That’s my intent. That’s one of the reasons I built the tiny house to change my expenses, so I wouldn’t work as hard, and/or as much. My intent is to travel more and have a free-er lifestyle and my tiny house affords me that opportunity even more. Even if I stay in Corporate America, I want it to be more on my terms and this direction and lifestyle enables me to do so. 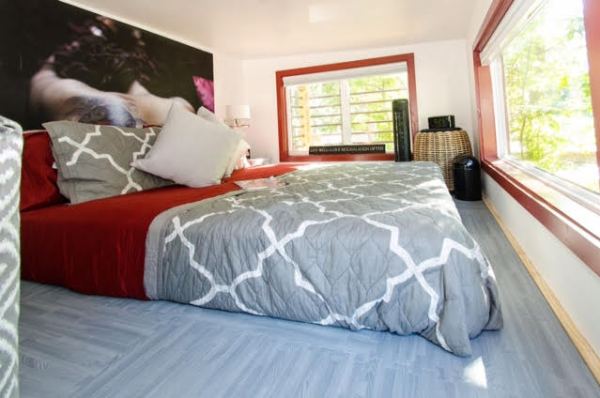 How does one live in a tiny house—what do you do while you’re here?

Everything you’d do in a normal size house, just in a more compact scale. Before building I studied how I used my space and incorporated that knowledge in my design. My open floor plan is focused on a comfortable seating area for entertaining, for lounging and relaxing, for TV watching – and I also have a very nice sized bathroom with a tub, a great kitchen and a very cool loft/bedroom space, with a balcony. I incorporated a lot of windows, which I always have to have in my space to enjoy the sunshine and sometimes I’ll just sit and watch the sunset. I most recently just built two decks off the front entrance, all by myself, to expand the exterior space that I can enjoy.

Would you change anything now that you’ve moved in?

Everyone always asked me that. I have been here now for 6 months and my answer is still no. It’s still new just being six months in, but I think if there were something that needed to be changed I would’ve known right off.